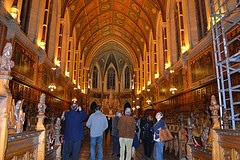 My original intention had been to say something about the AEA conference that I attended in Maynooth (just outside Dublin) in March. This conference was organised by the Association for Education and Ageing (AEA) in partnership with Age Action Ireland, WEA (Northern Ireland) and New Dynamics of Ageing.  I presented a version of a paper Josie Tetley has developed about the OPT-In project. The conference took place at the National University of Ireland Maynooth (NUIM) which began life as a seminary. Its claim to fame is that over the years it has trained 11000 Catholic priests, more than anywhere else in the world. Although it is now established mainly as a secular university the fact that our meetings were overlooked by portraits of severe-looking clerics gave a definite sense of place to the conference.  And the fact that I presented the OPT-In paper in a room called ‘Divinity 1’ is something that I’ll remember.
The conference was interesting with some fascinating papers about later life learning, particularly in Europe. It is noticeable that there is a greater level of interest in learning in later life in Europe than in the UK (especially England) where learning seems firmly focused on the skills agenda. Older learners have been particularly affected by the decimation of unaccredited adult learning in England.
AEA is concerned to try and establish the importance of learning through the life course. It looks likely that I will become the chair of AEA later this year. I am particularly keen to broaden the connections with what goes on in Europe. I am also concerned to establish connections in the UK with researchers whose interest in older people has implications for learning and with health and welfare practitioners whose practice has similar implications. I think these connections have the scope to broaden and deepen the role of learning in later life. There are all sorts of things that we need to learn about as we age and in order to make sense of our ageing and I hope that AEA will play a part in developing this awareness among researchers, practitioners and older people.
Jonathan Hughes
Posted by Caroline Holland at 09:27