I’m really pleased to see the blog about Jill Reynolds and the link to the heartfelt obituary in The Guardian.

I’m writing this blog a couple of week after the end of the Olympic Games in London and on the day that the Paralympic Games open.

The focus of the Olympics is very much on ‘youth’. Although the Opening ceremony looked back over British history, it culminated with the lighting of the very spectacular cauldron and with the torches, which had been bought in by ageing stars, being passed to the next (younger) generation. Indeed, the whole of the Olympic focuses on the youth of the world coming together to be ‘citius, altius , fortius’ (faster, higher, stronger). Added to this is the very idea of the Olympic ‘legacy’ strongly suggests something valuable being passed on to a younger generation.

Tied in with this overt focus on youth, is a sub-text of elite individualism in which gifted (young) individuals train for years on end to be the best.

However, the focus on elite youth overlooks the importance of social structures in which older people play important roles as coaches, officials and ‘gamesmakers’. The tendency to focus on the athletes who ‘medal’, while creating moments of undeniable drama, does mean that there is a real danger of overlooking and misreading what the ‘legacy’ of the London Olympics could be.

Politicians have been quick to jump on the feel good bandwagon of medal victories as a straw to grasp as the economy bumps along a very murky bottom.

But I think this misses the point. What surely more significant is the value of exercise in promoting and maintaining well-being throughout life. A study published in The Lancet to coincide with the build-up to the Olympics suggested that lack of exercise is now causing as many deaths as smoking across the world. The report, , estimates that about a third of adults are not doing enough physical activity, causing 5.3m deaths a year. That equates to about one in 10 deaths from diseases such as heart disease, diabetes and breast and colon cancer.

In 1978, Susan Sontag suggested that we are all ‘dual citizens’ of the land of the well and the land of the sick, ‘Although we all prefer to use only the good passport, sooner or later each of us is obliged, at least for a spell, to identify ourselves as citizens of that other place.’ Jill’s last illness, which she set out so candidly in her blogs, showed her becoming a citizen of the land of the sick.

However, wouldn’t it be great to have a legacy we could all share in? Such a legacy might be possible if there was wider recognition that it is only by creating social structures which enable more people to remain in the land of the well for as long as possible.

More of us (of all ages) would benefit from this than from the fetishisation of youth in which chronological age becomes a proxy for fitness and health. Well-being and the opportunity to engage in physical exercise should not be age-rationed but promoted as something that involves people at all stages of life. It might even mean that we would not have to comment on a 54 year old rider winning a gold medal.

It will be interesting to see how age plays out in the Paralympic Games.

Dr. Jonathan Hughes
Posted by Caroline Holland at 02:07 No comments: 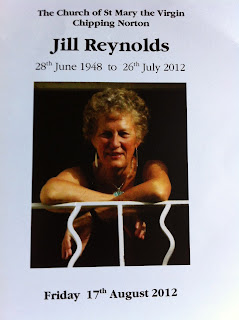 On Friday 17th August, friends of Jill Reynolds gathered with her family for a memorial service at St Mary the Virgin church in Chipping Camden, Oxfordshire. Jill had died peacefully at her other home in France, with her husband Dave holding her hand, on July 26th. Jill's obituary in the Guardian is here.

As anyone who followed her blogs here and in other places will know, Jill was a very calm and thoughtful person who was unflinching in writing about her illness and impending death, but she was a pains to make it easier for those around her to talk about it, or not talk about it, as they needed to. As Jill described in one of her blogs below, she had managed to eat, drink and sing with people from all aspects of her life before her death, and she was very grateful for being able to do that. I felt that because of how she handled the time between diagnosis just a few months ago, and her death, we at the memorial service were able to think about a life well-lived and a woman well-loved with sadness about her passing but without regrets about things unsaid or undone. A good death. Goodbye Jill, and thanks for being among us.
Posted by Caroline Holland at 02:50 No comments:

Long-time CABS member Bill Bytheway has written a guest blog for AgeUK about involving older people in research. Read it here: http://ageukblog.org.uk/2012/08/11/guest-blog-the-involvement-of-older-people-in-research-and-other-projects/
Posted by Caroline Holland at 08:01 No comments: